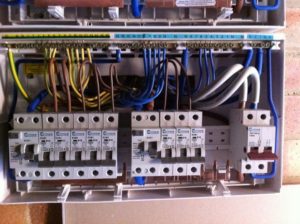 The switches on your circuit breaker board have the main function of offering a safe way to turn your electrical power ON and OFF in specific areas of the house so that maintenance or repair work can be carried out safely by qualified electricians. It also serves the important secondary purpose of triggering the circuit breakers that cut the power when an electrical issue such as a short circuit or a ground fault occurs. When these issues occur, they force too much electricity to flow through a single circuit than it is designed to handle. A lightning strike, although unlikely, also has the potential to supply your household wiring with too much voltage which can also trigger a circuit breaker in your home. However, many electrical faults that take place are due to internal factors such as an overloaded circuit or simply a blown lightbulb.

If you find yourself in a situation where your home or commercial building appears powerless, or if certain appliances and/or sections of lighting suddenly cut out and leave you in the dark, then it is most likely that the primary safety feature on your circuit breaker board has triggered and has interrupted the flow of electrical current running through your wiring, appliances and electrical feeds. Without the breaker’s built-in defence mechanism working effectively, powerful currents can overheat, cause electrical damage and can even catch fire. Of course, this would not only result in the need to replace the ruined circuitry and home appliances (at high cost), but in a worst-case scenario can also pose a risk to life. Therefore, discovering the cause of a tripped circuit breaker in your home or commercial property is important to minimise risk must but be done in a safe manner.

There are typically 3 main causes of why a circuit breaker will trip and cut the power:

An Overloaded Circuit – a circuit overload simply means that the electrical current running through a single circuit in your home or office is too high in voltage for what the circuit was designed to carry. For example; overloading a single plug socket with a number of extension leads and multiple electrical appliances at the same time. The issue is also more likely to occur if the appliances plugged in collectively require a lot of power. If your circuit breaker has kicked in then this is a good sign, it’s doing its job of preventing electrical hazards from causing risk. You can resolve this type of issue by separating your electrical appliances across various plug sockets rather than running multiple appliances on one circuit. This will reduce the level of voltage to a safer and more manageable quantity for your wiring and electrical outputs.

A Short Circuit – short-circuiting comes as a result of incorrect wiring or faulty appliances, switches, plugs, receptacles or cords in your home or office that much like an overloaded circuit, will result in too strong of an electrical current for one single circuit to handle. It takes place due to the active (hot) wire coming into contact with either the neutral wire and/or another hot wire. When this happens, the electrical charge of each wire combines and causes an unsafe level of voltage that exceeds the circuits load capabilities. A sign of short-circuiting occurring is if the circuit breakers kick in continuously in the same area of the property. Also, if you notice a faint burning smell deriving from any electrical output then it is important to get in touch with a certified electrician immediately and definitely not to attempt to do anything about it yourself. In doing so they can then solve your electrical issue safely and can prevent a potentially harmful electrical hazard from taking place.

A Ground Fault – ground faults are similar to short circuits although differ as they occur when the active (hot) wire comes into contact with the walls of the protective metal box or a ground wire. This electrical hazard is particularly dangerous in areas of moisture such as bathrooms, kitchens or external outputs and so it is stated by the National Authority that homes should be fitted with Ground Fault Circuit Interrupters (GFCI) and should be used in conjunction with safety switches and outlets. If you discover a ground fault in your home then it is crucially important to have a certified electrician to come and assess this type of issue as it can easily cause electric shocks, electrocution (especially in damp areas), and can even start fires. Ground faults aren’t the easiest electrical fault to find symptoms for, but if you experience things such as; a small electric shock when you touch a metal surface, if your TV/computer screen displays strobing lines, if you hear a humming/buzzing noise from your TV or stereo set, or if your GFCI trips frequently, then these are all signs that you need to call for professional help to resolve the issue properly as soon as possible.

If you suspect that a blown light bulb or an overloaded circuit is the cause of your circuit breaker tripping the power, then you should be able to resolve this issue yourself. However, you should follow the steps listed below to make sure that you do so safely. For a more serious electrical issue such as a short circuit or ground fault then you should not investigate yourself. It is crucial that if you experience any unexplained electrical faults in your property or notice any of the symptoms listed in this article or similar, then you should shut off power to that area of the house using the circuit breaker board/box ONLY and then contact a certified electrician immediately.

How to Reset a Circuit Breaker

1. LOCATE THE TRIPPED CIRCUIT – First, locate your circuit breaker board and identify exactly which circuit has automatically flipped to the OFF position i.e. the one that is pointing in the opposite direction to the other switches. The control panel box for your circuit breaker is often located in areas such as the garage, hallway, utility room, storage room, under the stairs or in recently renovated rooms, built in (hidden) behind certain units or surfaces. Depending on the model of the breaker, the tripped circuit switch can flip to a mid-way point between ON and OFF, and not necessarily all the way OFF. Many units may have an orange or red light feature to help you identify the tripped circuit, but not all models will have this feature.

2. TURN OFF ALL LIGHTS, PLUGS & APPLIANCES – Before you flip the switch back or do anything, it is important to turn off every light, plug and appliance (at the mains) that runs on the interrupted circuit. Electricians recommend that when you come to reset your circuit breaker there should be no electrical load present to ensure safety and to minimise the risk of damage to your electrics when you restore the power.

3. RESOLVE THE ISSUE (IF MINOR) – Now the power is completely OFF and safe to do so… you can change the blown lightbulb (if a bulb blew before the circuit tripped), or if you don’t think a blown lightbulb was the cause, then now is the time to investigate to see if any electrical outputs/plugs appear to have too many appliances running off the same circuit. If so you can amend the issue by reducing the amount of power one plug has to supply electricity to.

4. FLIP THE TRIPPED SWITCH BACK ON – Now that you’ve amended any minor electrical fault that may have tripped the circuit, you can attempt to restore the power. If the tripped circuit board switch is at a mid-point between ON and OFF, then first flip the switch all the way OFF and then back fully to ON. You should feel some resistance in the lever and hear a distinctive click and power up noise as the electricity is restored to the interrupted circuit. All switches on the circuit breaker box should now be facing in the same direction towards ON.

5. TEST THE CIRCUIT – Now you can start to plug your appliances back in and turn them ON. Your power should now be successfully restored. If your circuit breaker immediately or shortly after trips and cuts out once again then this suggests that the issue causing the interruption has not been solved. If so, double check for an overloaded circuit in the interrupted area and re-test. If the problem persists, then it’s time to call a certified electrician to safely resolve your electrical issue safely.